Sexy Algerian foot fetish babe Miss Cephora put on some chunky high heel boots so she could trample her slave in the kitchen. She walks all over him like a human carpet crushing his fat body with her full weight. She even punishes him with some painful facestanding while he lies there and takes it. This is part of her extreme and savage humiliation and domination of her slave.

Stunning and dominating babe Lady Alshari makes her slave suffer when she tramples him in jumping boots. She stands on top of him with her full weight and tramples him hard walking all over him like a human carpet. By the time she is done; he has marks all over his chest from where she stomped and danced on top of his chest. Her jumping boots are very effective in punishing her slave. 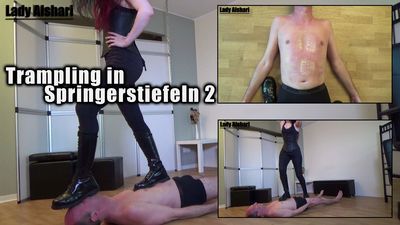 Two cute young blondes Nasti and Yana make their slave lie on the bed and tell him not to move. They stand on top of him with their full weight and trample all over him like a human carpet. His skinny chest caves in under their weight and they just keep stomping and jumping up and down on top of him and he just lies there and take it like a good slave.

Two hot girls wrap their foot slave in plastic and have their way with him while he lies helpless. They walk all over him like he was a human carpet trampling him with their full weight and stick their dirty boots in his mouth making him lick them clean. They add to his pain by jumping up and down on top of him crushing him while he lies there helpless.

This foot fetish queen likes to pull out all the stops when she humiliates her slaves with boot worship and makes sure that her boots are nice and muddy. Today she takes her loser footboy to the horse stable and walks all over in the mud and shit then makes him lie in the floor and polish her boots with his tongue. He has to lick them until they are completely clean.

Lovely foot fetish mistress Donna Dee has her dirty high heel boots on and shows no mercy to her slave as she makes him lick them and polish them with his tongue. He lies beneath her while she shoves the boots in his face and rubs them all over his tongue. Then she makes him put his hands behind his back so she can tie them while he licks her boots.

Foot fetish queen Gianna is dressed to impress with a classy outfit and stockings. She makes her footboy lie in the floor as she puts her high heels in his face. He takes off her shoes and she places her stockings covered feet over on his face and over his mouth. He sticks his tongue out like a good foot slave and licks her feet all over as she rubs her feet on his tongue.

Mistress Maeva likes going outdoors. On one of the trips, she went with her slave who also doubles up as her driver. He forgot to carry the stuff she had asked him to carry and going back was not an option. She was so pissed off she pushed him down and then trampled him with her high heel boots till he cried like a baby. She did not spare his face either.

Madame Marissa bought new boots and wanted to test them. One of the reasons she had bought them was so she could use them as a punishment tool for her slaves. The other reason was because she loves boots and looks great in them. When she reached home, she tried them on the slave and they performed great. He was in lots of pain and she cried like a little girl, which had never happened before.