All articles tagged with "Shoe Slave"

Mistress Gaia wanted to show her slave what she does to people who do not obey her. He was new and she wanted to warn him in advance. She used her boots to do it. She ballbusted him and she trampled him. She also had him lick the dirty soles of her boots till they were clean before she let him go. She had him tied so that he would not disturb her while punishing him.

Madame Marissa knew that her slave was starting to become unruly and she had to do something about it. She called her friend and they took him to the woods. While there, they cut him down to size by making him lick the soles of their muddy shoes. They did not care that it was humiliating and unhealthy. He had himself to blame and that was a warning for him.

Madame Marissa and her friend are used to good food. This slave did not cook the kind of meal they expected to eat. They almost had food poisoning from what he served them. They were furious with him and punished him for it. They trampled him in the kitchen with their boots. He cried and said he would never repeat it again but it was too late as they would not listen.

Goddess Gloria is a clean freak. She loves it when everything of hers is clean and she always makes sure that they are. She came home and her shoes were not clean. She made sure her slave cleaned them while she wore them. She made the slave lick the soles clean and remove all the dirt and even mud that was on them. Then she let him go back to what he was doing. 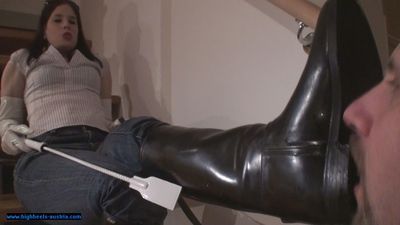 Mistress with a fetish for trampling

Trampling is the forte of this mistress. She loves it and can do it at any time of day or night. This loser was unfortunate enough to cross paths with her. She made him come to her house and she humiliated him by sitting on him and trampling his face with her boots. The poor guy tried to beg for mercy but she could hear none of it. She just continued having her fun. 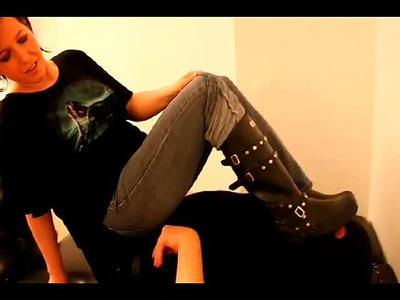 Mistress Kitty took her slave to the woods for some punishment. Unlike other mistresses, she did not like to punish or torture a slave or loser in the house. She prefers to do it outside and far away from people so that even if he cries, his cries would not be heard. She ordered him to lie down and jumped on his stomach and strangled him with her boots and ballbusted him.

Miss Raja punishes boss for not giving her a raise

Miss Raja wanted a raise and her boss resued. She went to his office and found him relaxing on the sofa. She slapped him and threatened to do worse if he called for help. She trampled his face and chest with her boots and he stifled his cries. She removed his trouser and crushed his cock and balls. In that very minute, he agreed to give her the raise she wanted.

I wanted to punish this employee for losing a top client. I kicked him brutally. I ballbusted him, jumped on him and trampled him with my boots

Mistress Jana's slave had misappropriated her money. And he had ot be dealt with. She trampled his fingers and hands with her high heel boots until he cried for forgiveness